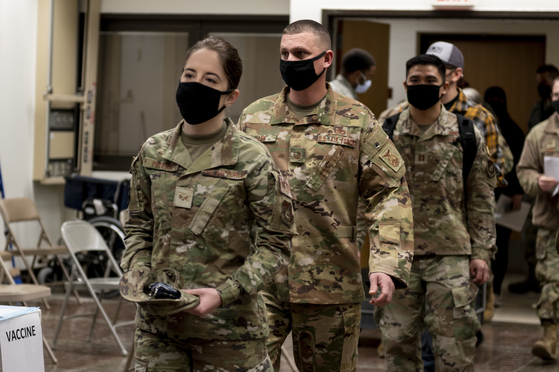 A handout photo made available by the United States Forces Korea (USFK) shows Members of Team Osan preparing to receive their first round of Moderna vaccines at Osan Air Base on Dec. 29, 2020. [EPA/USFK]

The U.S. Congress passed its annual defense budget bill Wednesday with no ban on the reduction of U.S. Forces in Korea, a clause that had been included in the bill for the past four years.

The bill was passed by Congress on Wednesday to authorize a total of $777.7 billion in spending for the 2022 fiscal year, namely on strategic competition with China and Russia and on disruptive technologies like hypersonic weapons and artificial intelligence, amongst other U.S. defense priorities.

Missing this year, however, was a clause legally restricting the U.S. government from reducing the number of U.S. Forces Korea (USFK) from its current level of around 28,500.

The NDAA bills passed for fiscal years from 2018 to 2021 all included a clause limiting the use of defense funds to reduce the U.S. forces in Korea.

"None of the funds authorized to be appropriated by this Act may be used to reduce the total number of members of the Armed Forces serving on active duty who are deployed to South Korea below 28,500," reads the clause included in the bill for 2021.

The clause was first included in the bill after former U.S. President Donald Trump spoke of pulling out the forces from Korea.

Some experts in Korea saw the omission as a possible U.S. defense strategy to not place any restrictions on the number of American troops in Korea, so as to use them flexibly in the Indo-Pacific region.

"Every year, when the NDAA is drafted, the U.S. Department of Defense comes to Congress to explain its direction. The core of the current defense policy is to contain China in the Indo-Pacific region," said Park Won-gon, professor of North Korean Studies at Ewha Womans University in Seoul.

"I think that in the process of drawing up a detailed plan for the Global Posture Review, which works on adjusting the deployment of U.S. forces around the world, the United States must have discussed how the USFK could be used to contain China," Park said.

The bill also stipulates that until 2027, the secretary of defense needs to annually submit to the specified congressional committees a report on military and security developments involving China, including on China's military presence and influence in Latin America and the Caribbean, Africa and the Indo-Pacific region, and what implications they may have on U.S. national security interests in the next 20 years. 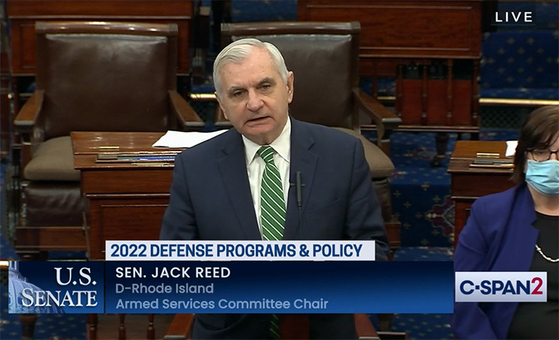 2022 U.S. defense bill erases ban on reducing USFK troops have 718 words, post on koreajoongangdaily.joins.com at December 16, 2021. This is cached page on Asia News. If you want remove this page, please contact us.